Smartphone usage keeps on increasing day by day, and the demand for new technologies gets heads up every minute. The smart technology giant, Apple has decided to step its feet onto its very own device called iBeacon. Since the launch of the iOS 8, Apple is trying to improve or upgrade the use of iBeacon devices.

What exactly is a iBeacon device and what does it do? 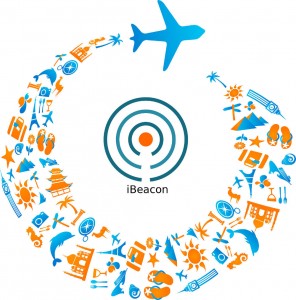 iBeacon is a low powered transmitter running with the help of Bluetooth Low Energy (BLE) technology. It communicates with the nearby iDevices running of iOS 7 or above. iBeacon devices communicate with each other and deliver tiny, useful information to the desired user. This information can be that of a hotel menu, occasional offers and more.

These simplified and very efficient devices not only transfers data but also receives useful information (say, if the user is in a shop, then these iBeacons records the total duration spent by the user being inside the shop/store) from the users. They are also useful in making smart payments and tracking goods of the logistic industry. These are not only the things but also there are many possibilities of this device being the next useful thing in the smart world.

How will iBeacon support travel?

As said, iBeacon is the fastest growing communication device that operates on Bluetooth Low-energy (BLE) transmission technology. iBeacons are sure to be useful to many industries from healthcare to retail industries and also in education and entertainment.

iBeacons – Airports: Installing beacons in airports helps the traveller to identify easily their boarding points and even the way in which they are intended to travel in the airport. Plus, the beacons placed near the security checkpoints might help the passengers in a hurry and at risk of losing the flight.

iBeacons – Railway Stations: Beacons are sure to help the passenger with the information like train delays, the track they should be on and more.

iBeacons – Railway Station Subways: The beacons will receive information about people running down the subway to catch their train and will deliver to the beacon at the train controller end. This act avoids any hassle in the railway stations.

iBeacons – Travel Agencies: iBeacons will serve travel agencies by using the data acquired from the past and also the public data to send personalised offers to the passengers.

There are many developers and programmers working hard on developing some useful applications that might enhance the use of iBeacons and also to simplify daily tasks. Listed below are few predictions of iBeacon’s service to the travel industry.

Not only the above stated but also many other things, iBeacons are sure to be your intelligent and personal guide.