PHP industry is ruling the developers’ world as the programmers, and the industry is expecting their web applications to be built using the world’s most popular and widely used programming language. Even if there are many high-level languages available on the web market, the importance is given to PHP as it is promising quality applications and better security than any other competitors. Using a framework for development is considered as a better choice since the frameworks make the development process more secure and faster while being more enjoyable.

Recently, PHP community is moving towards a solution called as the light-weight framework as these frameworks are gaining a significant number of followers. This article will give you the insights of the micro framework called as the Fat-Free Framework and the reason why to consider it as the first choice when thinking of micro frameworks for your web application development project.

If you are thinking of the best and easy-to-use micro PHP framework, then the Fat-Free framework will be a perfect choice as it helps developers build web applications that are dynamic and robust. It is made specifically take advantage of the PHP 5.3-specific features like namespace support, upgraded MySQL support, and ternary shortcut. The most interesting fact about the Fat-Free framework is the entire framework weighs only 42KB making it the smallest framework.

The framework’s features are bundled into three separate modules namely the core pack, the optional database pack and the expansion pack. The core pack holds the set of features required to construct a website as it includes routers, template engine, HTML forms processors, etc. The optional database pack is used to add database interaction via the Fat-Free Axon ORM. Finally, the optional expansion pack holds all the useful extensions like sitemap generator, thumbnail generator, CAPTCHA generator and more.

The Highlights of Fat-Free Framework:

Fat-Free PHP micro framework is a simple open-source web framework hosted on GitHub and Sourceforge. It is one of the most powerful PHP frameworks that is easy to use, learn and extend. Following are some of the highlights of this tiny yet powerful framework:

The advantages of using Fat-Free framework:

The Fat-free framework is commonly known as the F3 in the PHP developers community. Because of its various features, Fat-Free Framework is considered to be an alternative for CodeIgniter, and it has many advantages when compared with any other framework in the market. Following are some of the major benefits of choosing F3 over other frameworks:

Fat-Free Framework is so small and straightforward when compared with similar standing Laravel PHP framework. Today’s app building trend is shifting towards a simple yet powerful environment as it requires smaller applications with future-rich functionalities. It gives the basics to help you build robust application while providing a complete freedom. 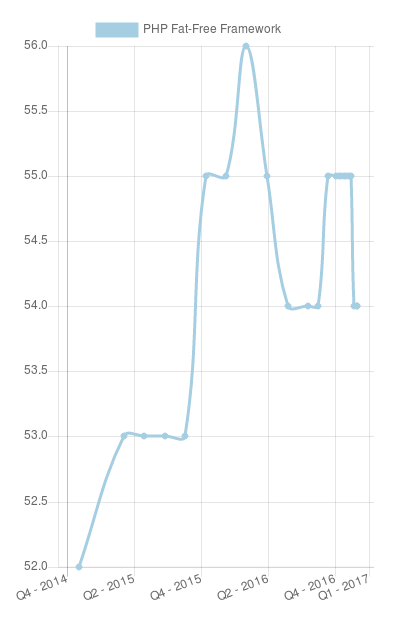 The above graph might show that the F3 allocation is dropping in the final quarter of 2016. But, the web geeks are promising that there will be a rise in the second and third quarter of 2017.