A mobile web app – in concise can be considered as nothing more than a website that’s wrapped within an isolated package to can be run as an application.

Let’s have a look at how it came to be, and what one will need in order to create mobile app.

The smart phones have brought the world to its users’ hands, with that the need for businesses and brands to make best use of this extended reach, towards their potential customers. To that extent, the companies have taken to going mobile, however the path was split clear into two; they had to either go with the mobile apps developers or website developers.

Each approach had its specific advantages and equally down dragging issues.

This left many businesses “wanting”, for a better approach; an approach that would single-handedly take care of these needs and provide them with an overall solution, like a path through the middle of this split.

The solution came with the advent of newer technologies such as HTML 5 and CSS3. Many saw better possibilities, and hoped that this solution would bring a permanent change to the existing trend – It did. 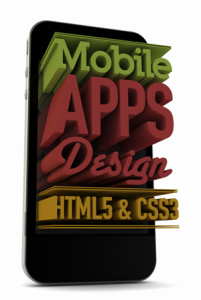 Through the decade, these technologies grew tremendously and incorporated within the trend to deliver a solution that was most apt and right for the current demands. With bettered performance and improved reliability, the technologies along with JavaScript took the app development world for a spin.

Now, the mobile apps market saw a change, where applications that were “web-based” brought the advantages of both the worlds together; to be precise – the cross platform support of a website and the usability of a native app. By taking advantage of these factors, the web-based mobile apps were able to meet various demands of the decade, thus, providing businesses and brands the solution they have all been anxiously seeking until now.

The combination of HTML5 along with CSS3 and JavaScript proved to be a powerful tool in creating such solid web apps that were very effective at delivering full-fledged mobile apps atmosphere.

Thus, this new approach not just affected the “how to build mobile apps?” aspect but also “who can build mobile apps?” as well. That is because developers and designers with skills and experience to create excellent websites were now able to take to developing and designing applications as their second nature. This gave Smartphone app development a boost that drove it right through the roof.

With cross platform mobile app development taking the lead when it comes to app preferences, by both the businesses and individuals alike; it is only natural that the demands for web apps have increased greatly. This added to the increase in web access speeds of the mobile devices in recent times, (such as through 3G and 4G) the ease of usage of web-based applications have made these apps the appropriate choice.

That being said; the HTML5 mobile app development is a very stable trend that has made even Microsoft to now take steps at supporting HTML5 with its IE. Hence, every reputed mobile apps development company has taken to providing related web app development services.